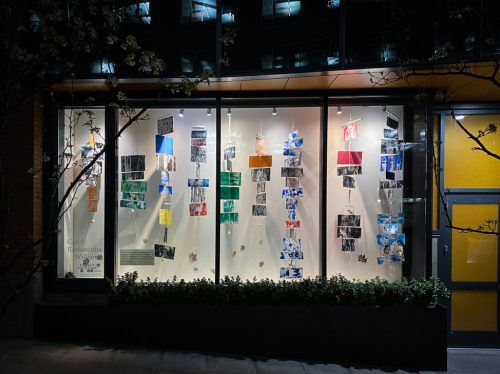 My creative process has spanned more than 20 years and the work I do is not easy, it is not always accepted by the establishment and it is not always understood. Born in Topeka, Kansas in a military family, Carol is the only child of Bessie Williams & Willie C. Williams. Soon after birth Carol and her family moved to Frankfurt Germany where she grew up on a military base and went to German schools until she was 11 ½. At which time she and her mother settled in Tacoma, WA. Carol graduated from Mount Tahoma High School, went to the Evergreen State College, was an Upward Bound student of 4 years.

Carol’s mother was a certified missionary and gave her life to community service for over 25 years, feeding and sheltering those who were homeless. or re-entering society from prison. Carol’s father was a patriot and believed in American Democracy. He gave 28 years of his life to his country through military service.

After graduating from college Carol was accepted as a Vista-Americorps for 1 year in Seattle’s White Center neighborhood working with young single mothers of Head Start students get jobs and get into school. Carol had her first group exhibit at the Seattle Central Community College Gallery in 1990 when she attended Seattle Central College, it was a community college. Her second group exhibit was in 1996 at the Evergreen State College at which time her work was acquired and catalogued into The Evergreen State College’s (TESC) video art library and showcased into the TESC student anthology book.

Carol is a mother to 2 children. She currently resides in Seattle, WA and works to mentor emerging artists from various backgrounds. Carol is a musician of 21 years who plays the violin and the viola. Carol enjoys hiking in the Pacific Northwest’s numerous old growth forests. Carol was certified thru the City of Seattle Parks & Recreation Urban Forest Educator Program and loves to teach about conifers, indigenous and invasive species. You can find her walking all over Seattle.
Carol deeply believes in the power of art to build community, bridge community relationships and create authentic space for healing.

Back to Storefronts Archive