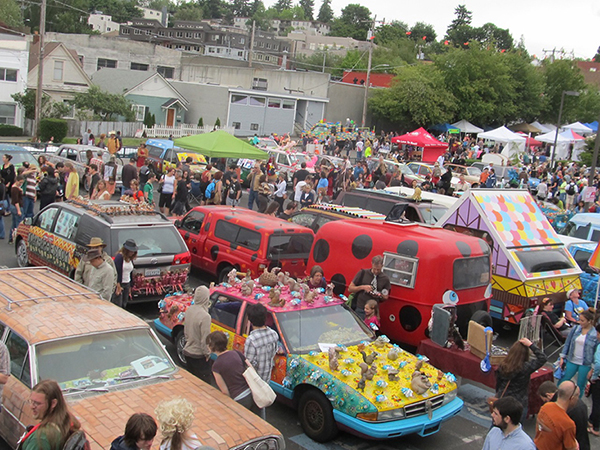 “Group History Art cars are a little-known form of folk art or street art, almost never appearing in galleries or museums, and typically created not by professional artists or car customizers, but rather by “just plain folks” as a form of public self-expression. Those who paint or otherwise decorate their street-legal cars in expressive ways often toil in isolation to make their visionary personal creations, before ever hearing the term “”art car”” or learning that there are others who have done similar things with their own vehicles. Thus, art cars as a folk art movement remain largely unknown not only to the general public, but also even to many of those who actually practice the art form. Seattle is a city with an unusually high concentration of art cars, partly as a result of the ongoing efforts of artist Kelly Lyles. In 1998, she co-founded a loose coalition of local car artists, and named the organization Seattle Art Cars. They organized an annual three-day event called the Seattle Art Car Blowout (SACBO), accessible to the public within the confines of an arts festival, but also conducted in part as a rolling caravan through open public streets. When the cars are parked, their creators often find themselves answering barrages of questions from curious members of the public, who are invariably fascinated with the idea of turning one’s plain everyday car into something extraordinary. Nowadays SACBO is held in conjunction with the Fremont Solstice Fair, and has become the West Coast’s largest annual art car gathering, attracting vehicles from around the USA, Canada, and Mexico. The primary mission of the Seattle Art Cars organization is to fund and produce SACBO each year, thereby promoting awareness of art cars as an art form among the general public of Seattle, while fostering exchange of art car technique and culture among car artists nationwide.”