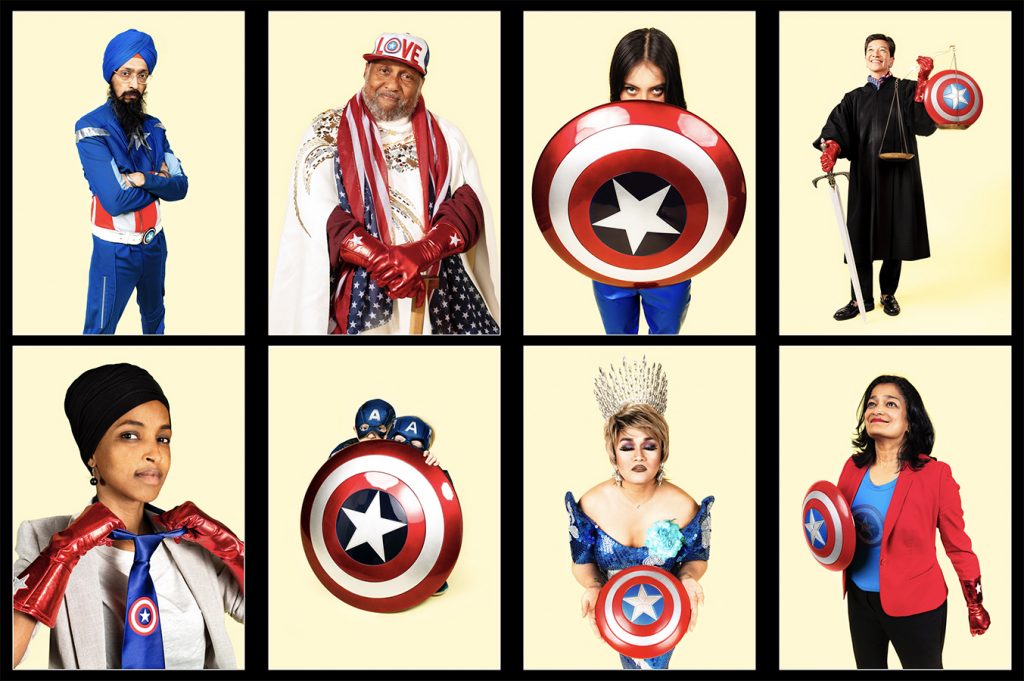 Outfitted with a turban, beard, glasses, and brown skin, Vishavjit Singh’s depiction of Marvel’s Captain America makes an immediate statement. Since the aftermath of the August 2012 massacre at a Milwaukee Sikh Gurudwara by a white supremacist, “Sikh Captain America” has donned the red, white, and blue uniform and shield of the traditionally blue-eyed, blond-haired superhero to challenge audiences with a discordant image of how we’re used to seeing this most patriotic persona. Singh travels the United States speaking to audiences on the power of storytelling to find the many intersections in our diverse narratives. To build on his mission of creating connection in a divided culture by working to broaden people’s understandings and assumptions of what constitutes the modern American story, he’s partnered with a Seattle-based team of creators and innovators led by photographer Nate Gowdy to chart a vision for expanding this concept of capturing the dynamic range of what it means to be American into a real-life manifestation. The American Superhero Project uses humor, compassion, and art to put our deep-rooted instincts — need for dignity, the pursuit of happiness, life with purpose, and dreams of a meaningful future — on full display by welcoming a wide array of individuals to step into their own versions of the iconic American superhero. Photographic portraits of overlooked heroes alongside high-profile change-makers are paired with interview-sourced kernels about what they’ve overcome and the moments that define their stories. In the process, this collaborative series teases out conversations on intersectional identity, perception, inclusivity, openness, and connection. There is a superhero within us all, regardless of nation of birth, beliefs, orientation, gender identity, race, ethnicity, age, abilities, profession, family makeup, and background. At a time in our society when the din of what appears to divide us takes center stage, we want to revere the cacophony of struggles and triumphs that unites us. To celebrate those differences, highlight our commonalities, and embrace what makes us each uniquely American, the project shines a spotlight on the strengths and vulnerabilities of our fellow Americans as they encapsulate the essence of the experiment we call American democracy.